I plus per il tuo amico peloso

Holiday Country homes and apartments in Umbria, Italy, where dogs of any size and cats are allowed and welcome, one per reservation. No daily extra cost is asked for their staying.

Nestled high in the luxurious Umbrian hills, overlooking the valley of Assisi and the surrounding hills between the Chiasco and the Tiber rivers sits the isolated, sprawling La Montagnola Estate, surrounded in its 17th century majesty by the dark green and silver of 6,000 olive trees. This is the domain of the Borgia and Medici family—an heirdom as ancient as Italy itself. Built over the ruins of a 12-century castle that was destroyed in 1298, the estate came back to life in the late 1600s, when the Baglioni counts established La Montagnola as a hunting lodge and summer residence.

The spectacularly beautiful, frescoed-ceiling palazzo that is the heart of the La Montagnola estate was the result, with architectural features that have remained intact in the centuries since. To see how little of the La Montagnola estate has changed over the centuries, look no further than the painting of the palazzo by Alessio De Marchis, whose fiery works saw him sentenced to years as a galley slave until he was pardoned by Pope Clemente XI, for whom he then painted canvass upon canvass of landscapes. There is the architecture of a building—still the home of the Borgia and Medici family—so expressive of the rococo style and 1700s classicism that it is now one of the most remarkable palazzos in all of the Perugia area. There is the inside courtyard, unusual among the 18th century villas, spread, as it is, over three floors. There is the palazzo's interior, characterized by a long gallery, multiple living rooms and working country kitchen, where cooking classes are held.

There remains the original 13th century private chapel called the “Oratorio Pubblico della Madonna Immacolata” dedicated to the Immaculate Conception, which is open to visitors. It has been the site of many family weddings, but when the boyish Marcello Borgia—a direct descendant of Italy's second most famed family–married the teenage Caterina Medici—a direct descendant of Italy's most famed family–in 1959, that wedding, with its attendant four-page coverage in Gente—was so large the family moved the event to Florence's Pitti Palace.

Today the family live in the palazzo, swim in the pool, and farm the estate, where they make olive oil so gorgeous that it won "Best of Class" in the New York International Olive Oil Competition in 2013. And, the family tends to three completely restored farmhouses which guests can rent. There is the hilltop Caprareccia, with its six bedrooms, seven bathrooms, private swimming pool and 360-degree view of Assisi. Halfway down the mountain, there is La Casa della Caccia, with its studio, one and two-bedroomed apartments, swimming pool, and hill views. And next to La Casa della Caccia, sharing its swimming pool, there is Il Poggio, with its one and three-bedroomed apartments and quiet hill country views. The New York Times calls La Montagnola a "staggeringly beautiful hilltop jewel." The Washington Post was even more effusive, in a travel piece about the estate: "If this is country living," the Post reported, "then sign this city boy up." 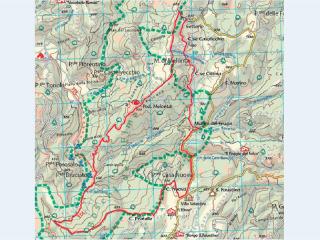